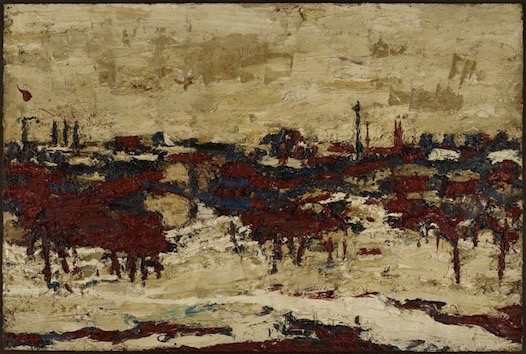 Frank Auerbach’s studio, where the painter has worked day and night for almost sixty years, has long been treasured by journalists, photographers and art historians. The dusty room in Camden, devoid of worldly possessions and inhabited by “stratified chunks of paint,” has itself been painted continuously in words, as if visitors are intoxicated by turpentine and charcoal dust. Artists’ workplaces often create magical atmospheres, and these studio narratives fill me with jealousy. But it seems that the urge to describe this room stems also from the fact that Auerbach himself is so difficult to grasp.

Frank Auerbach came to Britain in 1939, aged eight, a refuge of Nazism and soon to be orphaned. He does not fit glamorous notions of artistic genius. Compared with some of his friends in the London group which has dominated British painting in the last six decades—Francis Bacon the stalker of Soho backstreets, Lucian Freud the gambler—Auerbach’s is not a personality that generates its own column inches. Instead, his story is underwritten by patience, erudition and endless repetition. He has painted the same handful of sitters and landscapes in a precise cycle spiralling back to the beginning of his career; only his style fluctuates, gradually, like an ocean. His art, despite the constant respect of his peers, has at times been incompatible with a mainstream establishment seduced by novelty.

However, that is no longer the case. Auerbach now has not only the financial and critical success he deserves, he also has an honour most artists could only dream of. As of this weekend, at the Ordovas gallery on Savile Row, his work hangs alongside Rembrandt. “Raw Truth: Auerbach – Rembrandt” presents six of Auerbach’s paintings from 1961-5 alongside four works by the 17th century Dutch master.

Auerbach has long spoken about Rembrandt’s influence, and it is clear in the works selected. Three blistering portrayals of Primrose Hill echo, amplify and distort Rembrandt’s brooding etch, The Three Trees. Auerbach’s The Sitting Room and Rembrandt’s biblical scene Joseph Telling his Dreams share structural elements. The works create a rhythm of their own, drawing you in to examine the infinitely detailed Rembrandts, and out again to allow Auerbach’s broad patterns to take shape.

It is tempting to say that the contrast makes Rembrandt appear strikingly modern. In the Portrait of Dr Ephraïm Bueno, the thick brushstrokes seem to presage not only Auerbach but also Soutine. The fertile darkness of The Three Trees is almost suggestive of Goya. Yet this anachronistic approach is misleading. It repeats the conceit that some sort of decisive dislocation—whether it be advanced capitalism or photography—separates “modern” art from all that went before it. This leads to a patronising discussion about which artists from history should be granted the right to join us on this side. It also implies that modern artists need answer only to new criteria.

The idea behind the Rembrandt/Auerbach exhibition is that there has been not one great upheaval but many—that revolution is itself the common language of great art. Perhaps no living artist could fill this brief as effectively as Auerbach, who considers artists of all ages his contemporaries in an ongoing conversation of ideas. The exhibition is a moving vindication of this deep engagement with the past.

At the stage of his career seen in “Raw Truth,” Auerbach was applying paint with unprecedented thickness­—he recently joked that he would no longer be able to lift one of these canvases—as a result of countless sessions reworking each piece. This unrelenting approach reflects his belief that a subject must be properly understood before its “raw truth” can be reached. Such an understanding is technical, but also emotional, grinding down all superficial relations to discover a fleeting essence. Becoming familiar with a subject “leads you to its unfamiliarity,” he once said, “just as people only blurt out the raw truth in the middle of a family quarrel.”

The purpose of Auerbach’s inner quarrel is to offer the viewer an experience scarcely available in contemporary art: immersion. In an age dominated by momentary distraction, Auerbach, like Rembrandt, presents us with a puzzle, an overwhelming and uncomfortable question. His art is a labyrinth, in the centre of which the viewer must find him. He reminds us that immersing yourself in a painting can be an intense, gripping experience. As Auerbach himself put it, “I dislike the idea of ‘art for the people’—what people like is great art!”