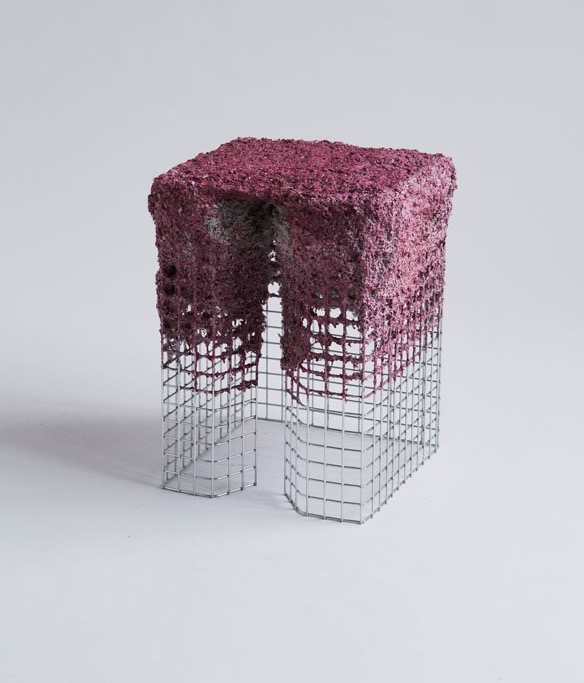 A version of this article first appeared in the Microsoft Five to Nine newspaper, curated by Protein, on 23 JUN 2015

Lately designer James Shaw has been busy considering the advantages of cooking people. He’s working on a hot tub for an artists’ retreat in Sweden, which will be cleaned by plants rather than chemicals. “Humans are full of nutrients,” he explains. “When you’re essentially cooking yourself in a big pot you’ll be oozing nutrients, which you would normally have to balance out with things like chlorine and hydrogen peroxide.” In his hot tub, however, you’ll be feeding the plants your own human stock.

The human body is only the latest subject of Shaw’s endless optimism and curiosity. His south London workshop, hidden behind scaffolding on the second floor of a huge housing estate, is churning out a growing range of bespoke products, from furniture to experimental gastronomy equipment. Everywhere he looks, Shaw sees the potential for new objects and for new ways of making. Time and again he turns to problems solved long ago, and solves them again in a new way.

While some inspiration comes from the products around him, some comes from the darkest depths of the internet and the experts who lurk there. “We’ve got a million Youtube videos available which I use all the time. There’s all these people out there who have so much knowledge and they can teach you to do anything,” he explains.

Shaw is a hands-on designer. He has tried designing for factory production, but quickly became dissatisfied. “There’s this traditional way designers work which is purely formal, where you’re detached from the making of the object, from the materiality of it, just drawing stuff on a sheet of paper or a computer,” he says. “Instead of starting with a blank piece of paper I’ll start with a bit of material and some substance, and try to squish it together and see what happens.” It’s this openness to thinking outside of the box that allows Shaw to be so creative.

He has a way with working with molten substances that he squirts from an array of guns, many of which are tools he has invented himself. The Plastic Extruding Gun, for instance, allows him to work with molten plastic without the industrial equipment usually needed. He hands me a colourful, alien-looking lump of matter, which is in fact milk-bottle plastic. Shaw is drawn to this material because he feels its potential is wasted. “It has this invisibility because it’s so ubiquitous. But you can melt it down and re-use it endlessly.”

One such obscure lump provided the starting point for Shaw’s breakthrough project, the Well Proven Chair, a radical new furniture design, made in collaboration with designer Marjan van Aubel, which got him nominated for the Design Museum Award, and which won the Arc Chair Design Award. In this instance, the moment of discovery was a chemical reaction between waste sawdust and soya bio resin, creating a substance that rose like bread in an oven.

Shaw immediately sensed the significance of his discovery. “I really see that chair as an image of an amazing new organic future where objects are grown rather than wasted,” he says. “It’s a much more efficient way of making stuff. We are slowly starting to get to it through biological engineering. It’s going to be the future.”

Like many designers today, Shaw is preoccupied with sustainability, which is a big motive for his various products. But the question is, having discovered a self-growing material, why did he choose to make a beautiful chair out of it? The answer, as the hot tub also shows, is that Shaw sees the desirability of a product as a useful way of opening our eyes to new ideas. “We’re all really good at looking at an object and thinking, ‘what would my life be like with this thing in it?’ I think that’s a really interesting tool to play with.”

It’s clear that for Shaw, sharing ideas is an important part of a designer’s job. He has recently been involved in a community scheme in Manchester called “Tearing Stuff Apart,” organised by artist Àgata Alcañiz, where a team of scientists, artists and designers teach the public about the products they use every day. In one class, they explained globalisation by taking apart a cheap hairdryer and tracing the origins of its numerous parts from around the world. “It’s about people actually experiencing stuff,” says Shaw, “finding ways to make abstract ideas direct is so important.”

But Shaw is only playing his part in the greater explosion of knowledge-sharing that is changing the shape of the design industry, and many others. “We’ve got a million Youtube videos out there, I use them all the time. There’s all these people, they have so much knowledge, and they can teach you to do anything.” This is fertile ground for would-be independent designers. Shaw’s advice to them? “I think the key to any creative endeavour is just to jump in there and get started,” he says. “How you approach unknowns is a big part of it. You need to approach them with openness and confidence.”

Of course, going it alone is tough. But for someone with Shaw’s creative energy, the appeal is obvious: “It means you can design your own life essentially. You can look at the things that are important to the way you want to live, like having a nice lunch with the people you share the studio with every day.”