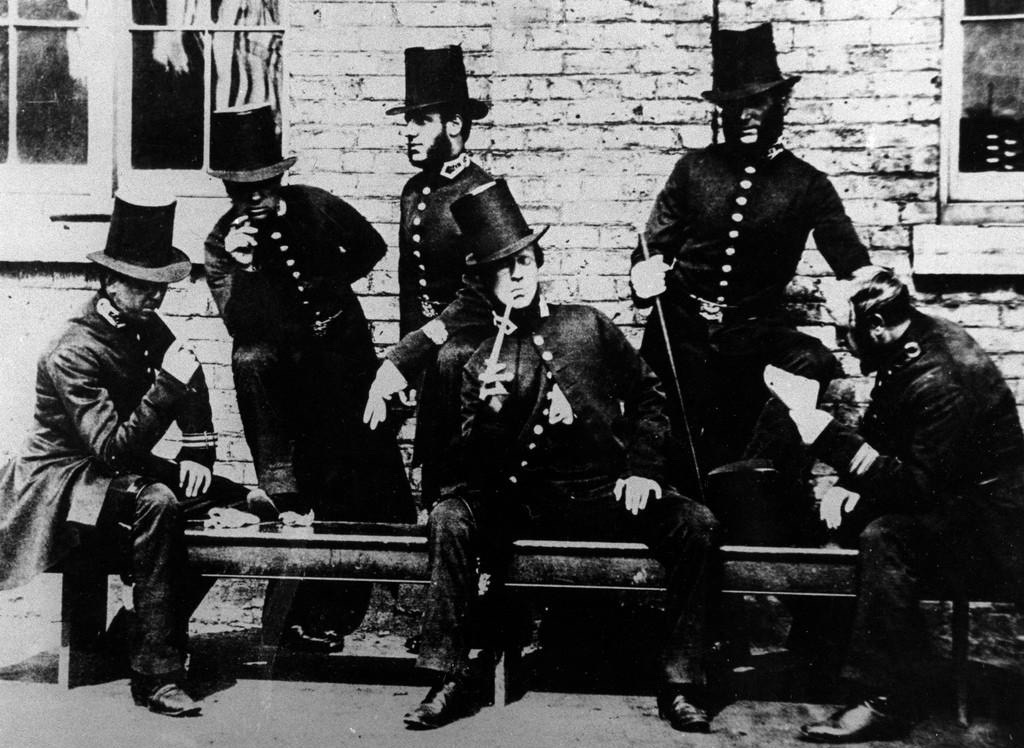 Members of the newly created police force in Manchester, c.1850

In 1858, an exclusive Soho dining society known simply as “the Club” – attended by former and future Prime Ministers, prominent clergymen, poets and men of letters – debated the question of “the highest period of civilization” ever reached. It was, they decided, “in London at the present moment.” The following year, several books were published which might, at first glance, appear to support this grandiose conclusion. They included On Liberty by John Stewart Mill, now a cornerstone of political philosophy; Adam Bede, the first novel by the great George Eliot; and Charles Darwin’s On the Origin of Species, which presented the most comprehensive argument yet for the theory of evolution.

Certainly, all of these works were products of quintessentially Victorian seams of thought. Yet they also revealed the fragility of what most members of “the Club” considered the very pillars of their “highest period of civilization.” Mill’s liberalism was hostile to the widespread complacency which held the British constitution to be perfect. George Eliot, aka Marian Evans, was a formidably educated woman living out of wedlock with the writer George Henry Lewes; as such, she was an affront to various tenets of contemporary morality. And Darwin’s work, of course, would fatally undermine the Victorian assumption that theirs was a divinely ordained greatness.

These are just some of the insecurities, tensions, and contradictions which lie at the heart of Britain’s history in the 19th century, and which provide the central theme of David Cannadine’s sweeping (and somewhat ironically titled) new volume, Victorious Century: The United Kingdom 1800-1906. This was a period when Britain’s global hegemony in economic, financial, and imperial terms was rendered almost illusory by an atmosphere of entropy and flux at home. It was a period when the state became more proactive and informed than ever before, yet could never fully comprehend the challenges of its rapidly industrialising economy. And it was a period when Britain’s Empire continued incessantly to expand, despite no one in Westminster finding a coherent plan of how, or for what purpose, to govern it.

Cannadine’s interest in discomfort and dilemma also explains the dates which bookend his narrative. In 1800 William Pitt’s administration enacted the Union with Ireland, bringing into existence the “United Kingdom” of the book’s title. Throughout the ensuing century, the “Irish question” would periodically overwhelm British politics through religious tension, famine, and popular unrest (indeed, I refer mainly to Britain in this review because Ireland was never assimilated into its cultural or political life). The general election of 1906, meanwhile, was the last hurrah of the Liberal Party, a coalition of progressive aristocrats, free traders and radical reformers whose internal conflicts in many ways mirrored those of Victorian Britain at large.

Cannadine’s approach is not an analytical one, and so there is little discussion of the great, complex question which looms over Britain’s 19th century: namely, why that seismic shift in world history, the industrial revolution, happened here. He does make clear, however, the importance of victory in the Napoleonic Wars which engulfed Europe until 1815. Without this hard-won success, Britain could not have exploited its geographical and cultural position in between its two largest export markets, Europe and the United States. Moreover, entrepreneurial industrial activity was directly stimulated by the state’s demand for materiel, and the wheels of international finance greased by government borrowing for the war effort.

From the outset, the volatility of this new model of capitalism was painfully clear. Until mid-century, Britain’s population, industrial output, investment and trade expanded at a dizzying rate, only to stumble repeatedly into prolonged and wrenching economic crises. The accompanying urban deprivation was brutal – life expectancy for a working-class man in 1840s Liverpool was 22 – though arguably no worse than the rural deprivation which had preceded it. Nonetheless, these realities, together with the regular outbreaks of revolution on the continent, meant that from the 1830s onwards the British state assumed a radically new role of “legislative engagement with contemporary issues”: regulating industry, enhancing local government and public services, and gauging public opinion to judge whether political concessions, particularly electoral reform, were necessary.

The second half of the century, by contrast, hatched anxieties which were less dramatic but more insidious. Rising giants such as the United States and Germany, with their superior resources and higher standards of science, technology, and education, foretold the end of British preeminence long before it came to pass. Certainly, the price of global competition was paid largely by landlords, farmers, and manufacturers; working-class living standards steadily improved. But declinism permeated the culture as a whole, manifesting itself in a range of doubts which may sound familiar to us today: immigration and loss of national identity, intractable inequality, military unpreparedness, the spiritual and physical decrepitude of the masses, and the depravity of conspicuous consumption among the upper classes.

Cannadine recounts all of this with lucidity, verve, and a dazzling turn of phrase. He is, however, committed to a top-down view of history which places Westminster politics at the centre of events. This has its benefits: we gain an understanding not just of such fascinating figures as Robert Peel, Benjamin Disraeli and William Gladstone, but also a detailed grasp of the evolution of modern government. This perspective does, however, run counter to the real story of the 19th century, which is precisely the redistribution of historical agency through expanding wealth, literacy, technology and political participation. Cannadine might have reassessed his priorities in light of his own book’s epigraph, from Marx’s Eighteenth Brumaire: “Men make their own history, but they do not do so freely, not under conditions of their own choosing.”