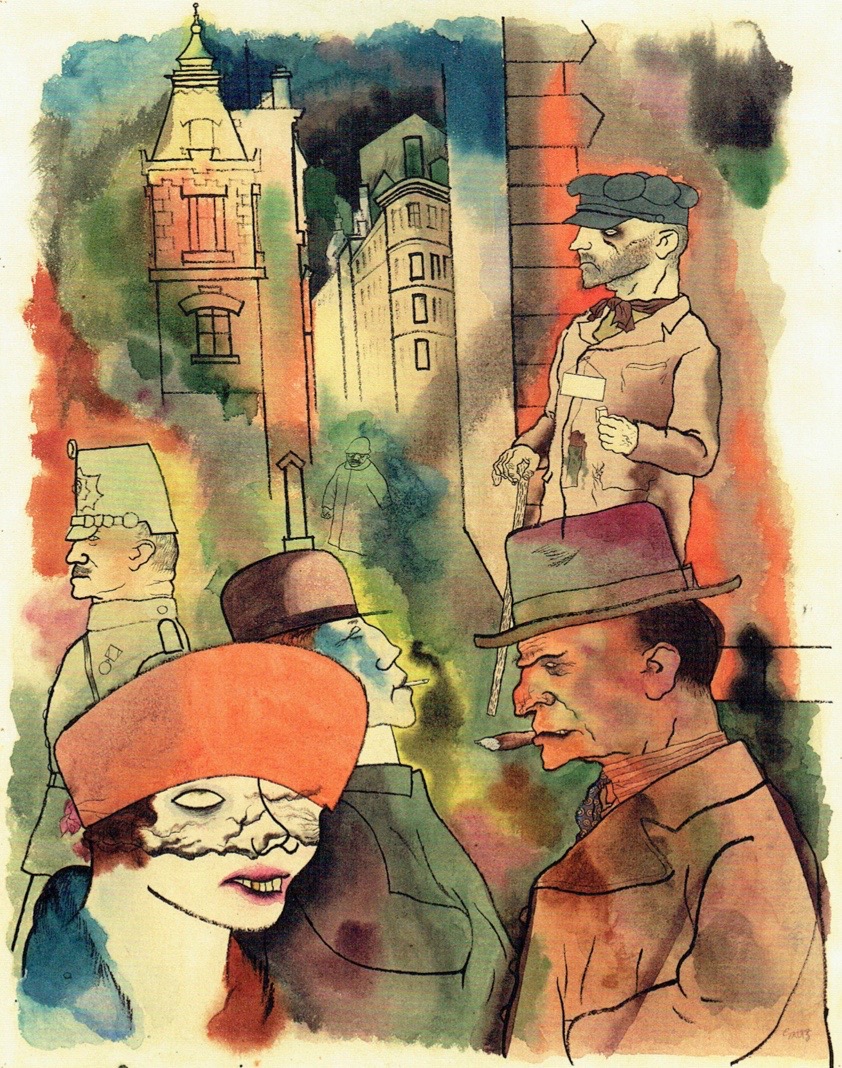 Berlin during the 1920s is often seen as an oasis for libertines, glittering between two authoritarian periods: the Wilhelmine Reich, with its bloody culmination in the First World War, and the rise of the Nazis. The era is kept alive by enduring images of political assassinations and barricades, the banknote-littered streets of hyperinflation, transvestism and open displays of homosexuality. Brecht was at the theatre, Dietrich in the cinema, Dada in the galleries, and WH Auden chasing rough trade in the bars. Nowhere did the Twenties roar so dementedly as in Berlin, the city struggling to find both a stable identity and enough food to eat.

Artist George Grosz, whose work comes to the Richard Nagy gallery on 28th September, was the penetrating satirist and provocateur of the capital city during these heady days. Nagy’s exhibition presents 48 of Grosz’s works from the period 1912-28, as Berlin lurched from wartime destitution and post-war anarchy, through the Weimar “golden years” towards depression. Grosz gives us the Berlin of popular imagination: kaleidoscopic views of cabarets, cafes and street scenes, populated by down-and-outs, monocled aristocrats, and easy women. Yet he also reminds us that disease, poverty and suicide were inevitable consequences of Berlin’s inequality and excess.

Grosz is a fascinating artist, taken both in isolation and in a wider context. Perhaps most striking technically is his gift for composition. Rarely does a figure occupy a work alone. In his early observations, carousing figures are drawn together by body language that really speaks. In his hectic crowds scenes, often scrawled with a reed pen, individuals are surrendered to a vibrant collective energy as their overlapping forms slide steeply up the page.

Grosz also developed a mosaic technique of composition, in which jagged blocks of colour, suggestive of stained glass, bring together a cacophony of forms. Nagy is keen to stress the accomplishment of Grosz’s colouring here, achieved by painting with watercolour onto a wet surface–“wet on wet”–often adding pen outlines only afterwards. 1918’s Südende is a good example. Parallels with cubism and futurism are apparent in the maligned forms and flat perspective of these works, but Grosz preferred to associate himself with the chopping technique of Dada (Grosz was at the forefront of the Berlin movement). He also cultivated a harsh, expressive outline that would above all define his style.

These are jaundiced portrayals, betraying an immense sensitivity to base instinct and social subtext. Grosz’s savage lines and grotesque figuration seek to cut through pretence, exposing bottomless appetites flourishing among decaying morals. His satirical motive was primarily political. He served only briefly in the First World War, but long enough to form the bleak view of militarism seen inGodfather Death of 1916, the  year he affronted German nationalism by Americanising his name (previously Georg Groß). Continued displays of disgust towards the army earned Grosz an assassination attempt in 1920. Hitler too would come for him almost immediately after taking power in 1933. Grosz had left for America just a fortnight earlier.

Grosz’s other targets included the church, the political elite, the old bourgeoisie and the new class of speculative super-rich which sprang from its demise. Unsurprisingly, he was an active member of the German Communist movement. He produced masses of both art and literature for radical publisher Malik Verlag, including his most famous collection of works, Ecce Homo, some of which can be seen at the Nagy exhibition.

Grosz’s art is above all uncompromising, and he was content to keep producing it in the face of continuous prosecutions. Perhaps the absence of an idealised proletariat in his work­–or anything idealised for that matter­­–can be explained by his artistic mode being an attacking rather than a sentimental one. Yet, it is difficult not to feel that there is more to Grosz’s portrayals of capitalist pigs at their various troughs than outright condemnation. His works bristle with colour, mischief and humour. Grosz’s fine reputation as a political satirist can invite the mistake of elevating him above his subject matter to a firm position of judgement. In reality, Grosz was intoxicated by this wreck of morals.

What is bad for society is often very good for the artist. Grosz must have understood this, since he not only found his impetus in moral outrage, but also built his style around a fixation with ugliness. This tension between aesthetic pleasure and moral agenda, between the practical joke and the chilling image, is the very lifeblood of Grosz’s art. In his autobiography, A Small Yes and a Big No, Grosz wrote of life in Berlin: “I was each one of the very characters I drew, the champagne-swilling glutton favoured by fate no less than the poor beggar standing with outstretched hands in the rain. I was split in two, just like society at large…” What he condemned as a man, he vicariously shared in as an artist. Perhaps it was the guilt of this collusion which drove him to such overt condemnation.

Grosz’s morbid fascination with sex, violence and human worthlessness also threatens to overrun his didacticism. In 1912, the 18-year-old Grosz was already infatuated with the lowlife circus performers and whores in the suburb or Südende where he lived. The brothel became a regular setting for his work. In Erotic Scene, a woman lies slumped on a bed as three lecherous men lean menacingly over her. Their proximity is tangible, suggesting a feast about to begin, as are the frantic movements of her arms as she urges them on. A dog sits beside the bed, a symbol of humanity’s rotten animalistic core which reappears throughout Grosz’s oeuvre.

The grotesque lechers of Grosz’s early eroticism were soon crystallised in the recurring character “John the woman slayer,” a murderous pervert with a butcher’s knife. We might think of Grosz’s “razor-sharp line,” as he referred to the brutal illustrative style he developed, as a similar refinement, striking yet disturbing. While it communicates the primitive power struggle within sex, it also cuts indiscriminately and with great relish, bringing disease, insanity and injustice to perpetrator and victim alike.

I raised this point with Richard Nagy himself, who proposed a different interpretation. The razor-sharp line, he suggested, represents the cruel, faceless action of society itself upon its dispossessed, which binds them tragically to the ugliness of their oppressors.

The timing of the exhibition is also poignant. A century on from Grosz’s arrival in Berlin, economic hardship grips Europe once again. I asked Nagy why another George Grosz had not risen from the wreckage. “Artists aren’t willing to take risks to tell the truth,” he said, “they’re interested in different things.” I understood what he meant­­: today’s artists may intend to shock, but they are increasingly afraid to offend. Grosz’s great gift is to remind us that offence is sometimes necessary.