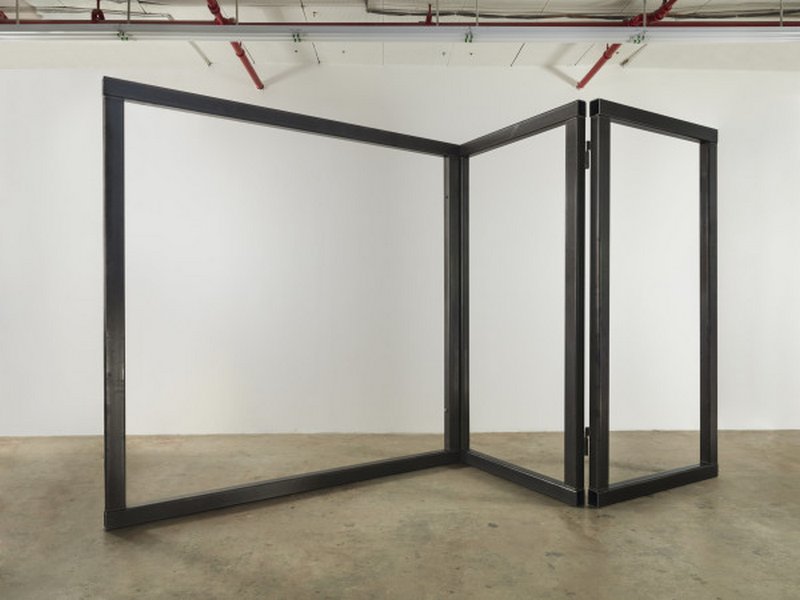 Carol Bove’s work is curious in that it seems to inhabit two worlds at once. Her careful arrangements of sculptures and found objects cry out to be interpreted as conceptual art. Yet, aesthetically speaking, the objects themselves have much in common with contemporary design.

Bove uses the same components again and again – small structures of brass cubes and concrete, driftwood bolted to I-beams, peacock feathers, hanging metal nets, giant ‘noodles’ of curling steel with a polished white finish. These, along with some original additions, are all involved in her latest exhibition, ‘The Plastic Unit’, which occupies five rooms at David Zwirner in London. Each of these objects has its own minimalist, tactile charm, but displaying them together in a gallery also poses the question of how they relate to one another.

At the show’s opening, Bove herself suggested there are two ways to approach her work: a ‘gestalt’ (or formal) approach, and a ‘psychedelic’ one. The latter she describes as ‘bridging the membrane into the subjective experience’ – or put more simply, ‘you can get lost in it’.

The gallery space is crafted to suggest the interaction of objects. You’re invited to look through them at other objects, or past them into another room. Bove is a ventriloquist, using her components to assume different voices from visual culture – the ornamental, the industrial, bric-a-brac, the artefact – and contrasting them with each other. Her detached, almost scientific placement of the objects rather cleverly gives them the aura of a museum display, or a show room for cars or antiques.

Bove’s work implies that it is meaningful, and moreover can be imbued with all manner of meaning, but it never goes so far as to confirm or deny anything in particular. I suspect this relaxed ambiguity is a reason why Bove’s short career has been packed with impressive solo exhibitions. While her work acts as a lightning rod for the aggressive interpretations of an art world audience, it also makes no demand of the viewer who would rather read nothing between the lines, and merely enjoy the strange buzz of these objects-turned-artefacts or commodities. In other words, the conceptual part of Bove’s work is optional.

This can be seen as part of Bove’s ongoing interest in context, for the obvious conclusion must be that conceptual depth stems purely from her work’s gallery setting. If Marcel Duchamp’s famous breakthrough was to show that anything placed in a gallery is art, Bove’s response is to show that contemporary art now depends on the gallery for its very existence.

What makes the dualism of Bove’s work all the more apparent is that her objects so easily slide into the category of interior design. That this is little commented on is perhaps a reflection of how deftly Bove uses the implications of the gallery space. Yet, her angular brass frames and knotted dark wood sculptures would look entirely at home in the window of Andrew Martin or the Conran Shop. This connection is made explicit by another exhibition currently taking place at the Henry Moore Institute in Leeds, which puts Bove alongside legendary architect and designer Carlo Scarpa. The aesthetic similarities are uncanny (though according to Bove, coincidental).

The traditional boundary between art and design is functionality. Designers like Carlo Scarpa, who shared Bove’s interest in the psychic life of objects and space, test that boundary. Bove does the same from the other side: with her knack for exposing the mechanics of interpretation and display, it is not unreasonable to think of her as a designer whose function is to provide contemporary art exhibitions.