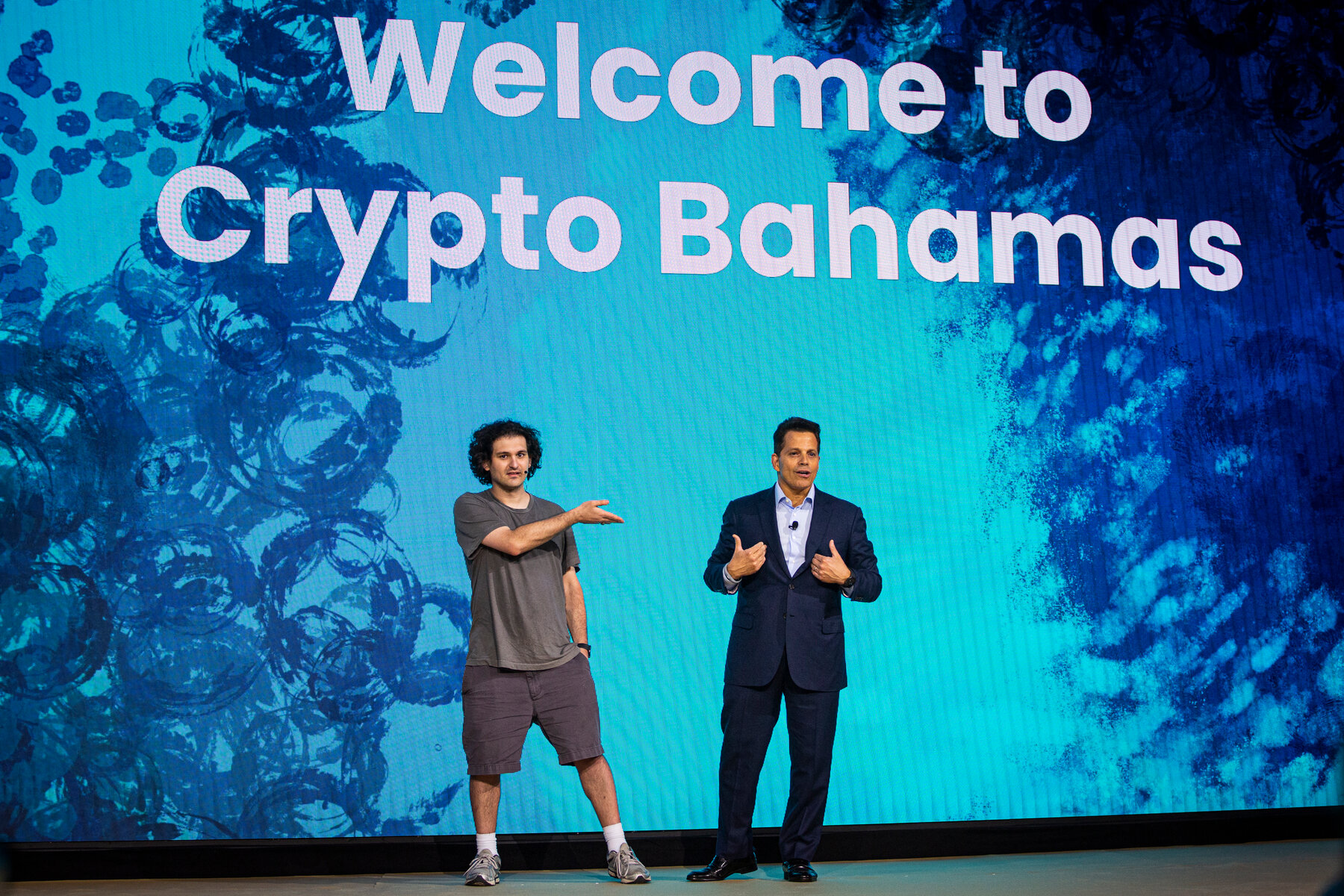 FTX founder Sam Bankman-Fried on stage in the Bahamas.

This article was originally published by The Critic magazine in November 2022. Read it here.

n Friday the saga of Elizabeth Holmes will move one step closer to its conclusion. Holmes, founder of the ill-fated health tech company Theranos, was convicted of fraud and conspiracy at the start of this year, and she will now receive her sentence. This is bad news for the army of hacks, podcasters and documentary makers who have spent years making hay from the Theranos debacle, a story of a charismatic young woman who fooled a wide swathe of elite America with her vision of innovation as a force for good.

They shouldn’t worry. With impeccable timing, a new tale of investor credulity and disastrous personal ambition has burst into the headlines. Last week, the cryptocurrency exchange FTX dramatically imploded after details of its creative accounting techniques were leaked to a news website, and a rival exchange started a run on its digital tokens. Billions of dollars belonging to investors and customers evaporated more or less overnight. As the news unfolded, all eyes turned to Sam Bankman-Fried, the 30-year-old crypto whizz-kid and Effective Altruism guru who exercised close control over FTX and a powerful grip on the imagination of Silicon Valley investors.

Bankman-Fried has reportedly been taken into custody by authorities in the Bahamas, where FTX was based. I won’t comment on the legal implications of his demise. What we can say, though, is that between him and Holmes, we havemounting evidence that the cult of the disruptive genius at the heart of tech capitalism has become a danger to the public.

Bankman-Fried rose through the crypto world on a wave of high-minded talk and personal charm. He offered financial brilliance along with the image of a scruffy outsider, appearing on stage with Bill Clinton and Tony Blair in a t-shirt and shorts, playing video games during business calls and bragging about sleeping on a beanbag next to his desk. Closely associated with the Effective Altruism movement — a school of ethics that seeks the most rational ways of maximising human wellbeing — Bankman-Fried claimed he was getting stinking rich so he could give it away. He cemented his public profile by cooperating with lawmakers in Washington over crypto regulation, whilst sponsoring various sports teams and donating to the Democratic party. Naturally he also made time to hobnob with celebrities like the supermodel Gisele Bundchen, appointed to lead FTX’s environmental and social initiatives.

The investors lapped it up. A now-deleted article on the website of Sequoia Capital, the venture capital firm that previously backed PayPal and Google, described the response of its partners when Bankman-Fried pitched to them: “I LOVE THIS FOUNDER”; “I am 10 out of 10”; “YES!!” The problem is, neither theynor anyone else beyond a tight circle of friends had the full picture of FTX’s financial dealings. If they had, they might have seen that customer deposits werebeing loaned to Alameda Research, another of Bankman-Fried’s companies, to shore up risky investments. In the end, the assets FTX held as collateral weremostly its own digital tokens, whose value crashed when panicked customers tried to withdraw their funds en masse.

Bankman-Fried’s rise and fall shows a more than passing resemblance to the case of Holmes and Theranos. She too cultivated a disruptive image, a Stanford drop-out turned founder at the age of nineteen, wearing black turtlenecks in a weird homage to Steve Jobs. Her promise of a revolutionary blood-testing technology, bypassing scary needles and replacing doctors’ appointments with a trip to Walmart, won her more illustrious supporters than it’s possible to enumerate. They included Barack Obama, Hillary Clinton, Henry Kissinger, Bill Gates, Rupert Murdoch and Betsy DeVos. As revealed by John Carreyou in his 2015 Wall Street Journal exposé, and by a succession of witnesses at Holmes’ trial, she lied about the capabilities of her so-called Edison machine, keeping her supposedly ground-breaking tech cloaked in secrecy to hide its failures.

Prosecutors demanding a tough sentence for Holmes this week claim she “seized upon investors’ desire to make the world a better place in order to lure them into believing her lies”. Weare already seeing similar claims of moral betrayal from Bankman-Fried’s supporters, including a hand-wringing Twitter thread by leading Effective Altruism philosopher William MacAskill. It would be comforting to think that Holmes and Bankman-Fried were just massive grifters — sociopaths preying on the goodwill of others — but this would be letting their backers and the system that produced them off the hook. The real story here is surely the lack of scepticism shown towards these celebrity entrepreneurs once their messianic image was established.

Holmes’ followers had no right to be astonished that Theranos turned out to be a dud, given that clinical scientists were raising flags about the company’s secrecy long before it became a public scandal. Writing a New Yorker profile of Holmes in2014, at the height of her fame, Ken Auletta described her explanation of the technology as “comically vague”. Did none of Theranos’ board members stop to ask why their illustrious colleagues included just two people with a medical licence?

With Bankman-Fried the signs were even more obvious. In a now-infamous Bloomberg interview, the founder described part of his business model as a magic box that people stuff money into simply because others are doing so, and which “literally does nothing” apart from generate tokens that can be traded based on the hypothetical potential of said box. The journalist Matt Levine paraphrased this theory as “I’m in the Ponzi business and it’s pretty good”, which Bankman-Fried admitted was “a pretty reasonable response”.

The entrepreneur Antonio García Martínez has an interesting historical take on the FTX fiasco, pointing out that charisma and speculation are typical in the early stages of a new technological paradigm, before it settles into a more stable, regulated status-quo. “Innovation starts in mad genius and grift and bubbles,” he writes, “and ends in establishment institutions that go on to reject the next round of mayhem.” A good point, but hardly a reassuring one, given that there will always be another hyper-ambitious figure promising to open up a new frontier.

We know this because there is such obvious demand in American elite society for individuals who can legitimise tech capitalism, whether through their aura of personal brilliance or by demonstrating its potential for beneficial progress. The reverence for Steve Jobs and Elon Musk are proof of this, but Holmes and Bankman-Fried went a step further by presenting themselves as ambitious prodigies and evangelical do-gooders. Where did they learn this formula for adulation? It’s notable that both are themselves quintessential products of the elite: Holmes’ parents were Washington insiders; Bankman-Fried’s were Stanford law professors.

Ironically, the danger posed by such figures is not so much that they are “disruptive”, but that they awaken a deeply conformist desire to worship the glamorous heralds of progress. A desire, it seems, that can make people rather gullible.

According to the latest reports, the collapse of Bankman-Fried’s crypto empire could affect as many as a million creditors, which is saying nothing of the individuals whose savings were implicated through institutional investors. Still, we can be grateful it happened now, and not at a point where cryptocurrency had become large enough to pose a systemic threat to the financial system. As for Theranos, the testimony of patients who received false blood-test results ought to be warning enough about what a close call that was. How long will our luck last? Given the ever-growing role of technology in our lives, the next hyped-up young genius may cause more havoc still.