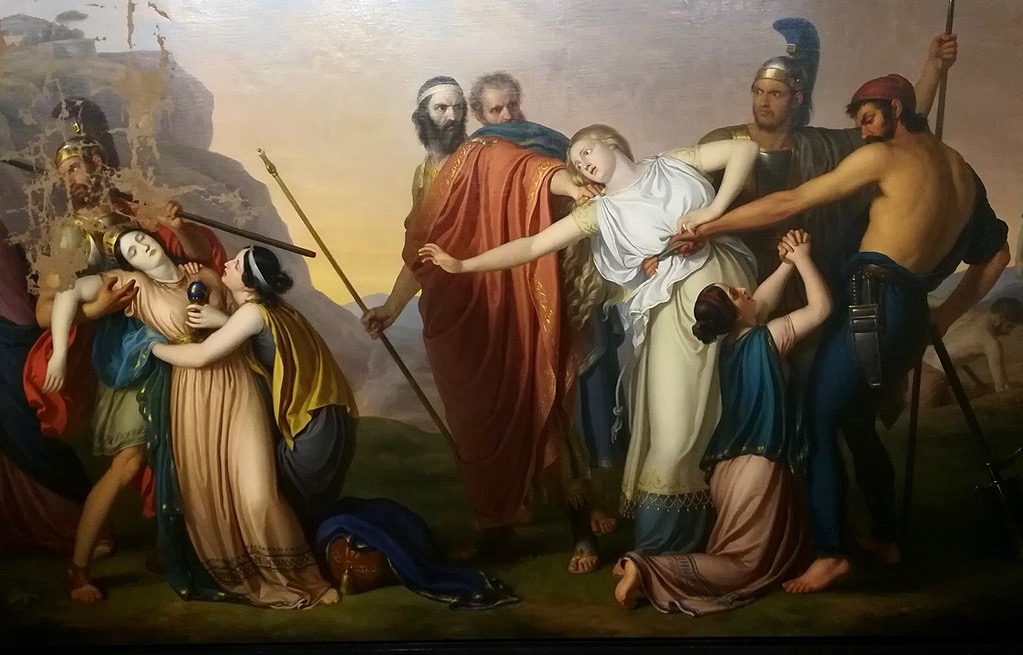 The play opens with two sisters, Antigone and Ismene, arguing about their duties to family versus those to the state. Their two brothers have just killed each other while leading opposing sides of a civil war in Thebes. Their uncle Creon has now taken charge of the city, and has decreed that one of the brothers, Polynices, is to be denied a funeral: “he must be left unburied, his corpse / carrion for the birds and dogs to tear, / an obscenity for the citizens to behold.”

Ismene chooses obedience to Creon, but Antigone decides to rebel. She casts a symbolic handful of dust over Polynices’ corpse, and when brought before Creon, affirms her action in the name of “the great unwritten, unshakeable traditions” demanding funeral rites for the dead. So begins a confrontation between two headstrong, unflinching protagonists. It will end with Antigone hanging herself in her jail cell, leading to the suicide both of Creon’s son (who was engaged to Antigone), and consequently of his wife.

“When I see that king in that play, the first name that came to mind was Donald Trump: arrogance, misogyny, tunnel vision.” This was reportedly one audience member’s response to Antigone in Ferguson, a 2018 theatre piece that brought a famous Greek tragedy into the context of US race relations. That tragedy is Sophocles’ Antigone, which I have summarised above. The play is now frequently being used to explore contemporary politics, especially in relation to the theme of resistance. “It’s a story of a woman who finds the courage of her convictions to speak truth to power,” said Carl Cofield, who directed another production of Antigone in New York last year. Cofield drew parallels with the #MeToo movement, Black Lives Matter, and “the resistance to the outcome of the presidential race.”

This reading of Antigone has become increasingly common since the post-war era. Its originator was perhaps Bertolt Brecht’s 1948 adaptation, which imagined a scenario where the German people had risen against Hitler. Since the 1970s Antigone has often been portrayed as a feminist heroine, and the play has served as a call-to-arms in countless non-western contexts too. As Fanny Söderbäck proudly notes: “Whenever and wherever civil liberties are endangered, when the rights or existence of aboriginal peoples are threatened, when revolutions are underway, when injustices take place – wherever she is needed, Antigone appears.”

Such appropriation of a classical figure is by no means unique. It echoes the canonisation of Socrates as a martyr for free speech and civil disobedience, most notably by John Stuart Mill, Mohandas Gandhi and Martin Luther King. And just as this image of Socrates rests on Plato’s Apology of Socrates, but ignores the quite different portrait in the Crito, the “resistance” reading of Antigone bears little resemblance to how the play was originally intended and received.

An audience in 5th century Athens would not have regarded Antigone as subversive towards the authority of the state. In fact, if you accept the conventional dating of the play (441 BC), the Athenian people elected Sophocles to serve as a general immediately after its first performance. Rather, the dramatic impact of Antigone lay in the clash of two traditional visions of justice. Creon’s position at the outset – “whoever places a friend / above the good of his own country, he is nothing” – was not a queue for booing and hissing, but a statement of conventional wisdom. Likewise, Antigone’s insistence on burying her brother was an assertion of divine law, and more particularly, her religious duties as a woman. Thus Creon’s error is not that he defends the prerogatives of the state, but that he makes them incompatible with the claims of the gods.

Sophocles’ protagonists were not just embodiments of abstract principles, though. He was also interested in what motivates individuals to defend a particular idea of justice. Creon, it seems, is susceptible to megalomania and paranoia. And as Antigone famously admits in her final speech, her determination to bury her brother was a very personal obsession, born from her uniquely wretched circumstances.

It’s hardly surprising that our intuitive reading of Antigone has changed over more than two millennia. The world we inhabit, and the moral assumptions that guide us through it, are radically different. Moreover, Antigone is one of those works that seem to demand a new interpretation in every epoch. Hegel, for instance, used the play to illustrate his theory of dialectical progress in history. The moral claims of Antigone and Creon – or in Hegel’s scheme, family and state – are both inadequate, but the need to synthesise them cannot be grasped until they have clashed and been found wanting. Simone de Beauvoir also identified both protagonists with flawed outlooks, though in her reading Antigone is a “moral idealist” and Creon a “political realist” – two ways, according to de Beauvoir, of avoiding moral responsibility.

So neither Hegel nor de Beauvoir recognised Antigone as the obvious voice of justice. Then again, they were clearly reading the play with the templates provided by their own moments in history. Hegel’s historical forces belong to the tumultuous conflicts of the early 19thcentury, in which he had staked out a position as both a monarchist and a supporter of the French Revolution. De Beauvoir’s archetypes belong to Nazi-occupied France – a world of vicious dilemmas in which pacifists, collaborators and resistors had all claimed to act for the greater good, and were all, in her eyes, morally compromised.

Thus, each era tries to understand Antigone using the roles and narratives particular to its own moral universe. And this, I would argue, is a natural part of artistic and political discourse. Such works cannot be quarantined in their original context – they have different resonances for different audiences. Moreover, the question of how one interprets something is always preceded by the question of why one bothers to interpret it at all, and that second question is inevitably bound up with what we consider important in the here and now. Our own moral universe, as I’ve already suggested, is largely defined by the righteousness of resistance and the struggle for freedom. Consequently, works from the past tend to be interpreted according to a narrative where one agent or category of agent suppresses the autonomy of another.

Nonetheless, there are pitfalls here. I think it is important for us to remain aware that our intuitive reading of a play like Antigone is precisely that – our intuitive reading. Otherwise, we may succumb to a kind of wishful thinking. We may end up being so comfortable projecting our values across time that we forget they belong to a contingent moment in history. We might forget, in other words, that our values are the product of a particular set of circumstances, not of some divine edict, and so cannot simply be accepted as right.

Of course we can always try to reason about right and wrong. But if we unthinkingly apply our worldview to people in other eras, we are doing precisely the opposite. We are turning history itself into a vast echo chamber, relieving us of the need to examine or defend our assumptions.

The task of guarding against such myopia has traditionally fallen to academic scholarship. And in a sense, this institution has never been better equipped to do it. Since the advent of New Historicism in the 1980s, the importance of the context in which works are made, as well as the context in which they are read, has been widely acknowledged in the humanities. But this has had a peculiarly inverse effect. The apparent impossibility of establishing any objective or timeless lesson in a play like Antigone has only heightened the temptation to claim it for ourselves.

Consider the approach taken by the influential gender theorist Judith Butler in her book Antigone’s Claim (2000). Using modern psychoanalytic concepts, Butler delves into the murky world of family and sexuality in the play (Antigone is the daughter of the infamously incestuous Oedipus, whose “curse” she is said to have inherited). Butler thus unearths “a classical western dilemma” about the treatment of those who do not fit within “normative versions of kinship.”

However Butler is not interested in establishing any timeless insights about Antigone. As she makes clear throughout her analysis, she is interested in Antigone “as a figure for politics,” and in particular, for the contemporary politics of resistance. “I began to think about Antigone a few years ago,” she says, “as I wondered what had happened to those feminist efforts to confront and defy the state.” She then sets out her aim of using the play to examine contemporary society, asking

what the conditions of intelligibility could have been that would have made [Antigone’s] life possible, indeed, what sustaining web of relations makes our lives possible, those of us who confound kinship in the rearticulation of its terms?

This leads her to compare Antigone’s plight to that of AIDS victims and those in alternative parenting arrangements, while also hinting at “the direction for a psychoanalytic theory” which avoids “heterosexual closure.”

Butler is clearly not guilty, then, of forgetting her own situatedness in history. However this does raise the question, if one is only interested in the present, why use a work from the past at all? Butler may well answer that such texts are an integral part of the political culture she is criticising. And that is fine, as far as it goes. But this approach seems to risk undermining the whole point of historicism. For although it does not pretend that people in other times had access to the same ideas and beliefs as we do, it does imply that the past is only worth considering in terms our own ideas and beliefs. And the result is very similar: Antigone becomes, effectively, a play about us.

In other words, Butler’s way of appropriating the past subtly makes it conform to contemporary values. And in doing so, it lays the ground for that echo-chamber I described earlier, whereby works from the past merely serve as opportunities to give our own beliefs a sheen of eternal truth. Indeed, elsewhere in the recent scholarship on Antigone, one finds that an impeccably historicist reading can nonetheless end  like this:

Thus is the nature of political activism bent on the expansion of human rights and the extension of human dignity. … Antigone is a charter member of a small human community that is “la Résistance,” wherever it pops up in the history of human civilisation. (My emphasis)

Such statements are not just nonsensical, but self-defeating. However valuable ideas like human rights, human dignity, and resistance might be, they do not belong to “the history of human civilisation.” Moreover, it is impossible to understand their value unless one realises this.

The crucial question here is what we do with the knowledge that values differ across time. There is, perhaps, a natural tendency to see this as demanding an assertion of the ultimate validity of our own worldview. In this sense, our desire to portray Antigone as a figure of resistance recalls those theologians who used to scour classical texts for foreshadowings of Christ. I would argue, however, that we should treat the contingency of our beliefs as a warning against excessive certainty. Ideas are always changing in relation to circumstances, and as such, need to be constantly questioned.