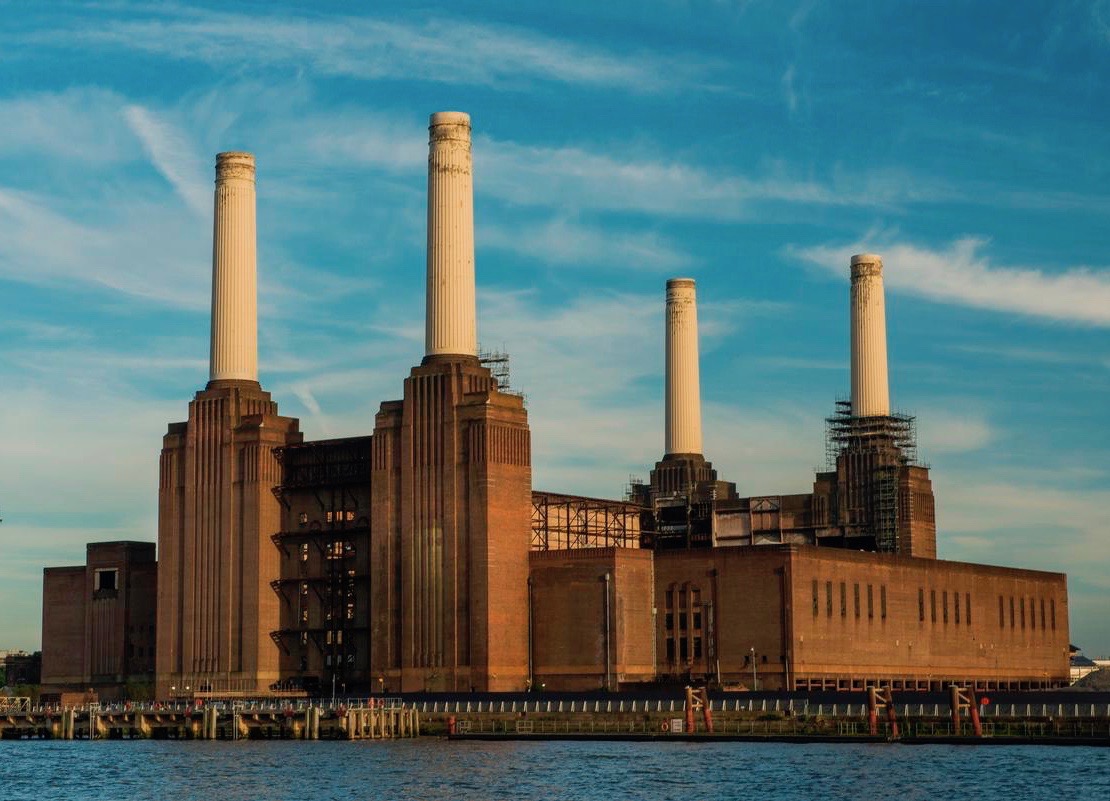 This article was originally published by The Critic Magazine in October 2022. Read it here.

Approaching the revamped Battersea Power Station on a sunny autumn morning, the area around the building is dotted with slack-jawed visitors, peering skywards in awe through the lenses of theirsmartphones. This masterpiece on the Thames, designed by Giles Gilbert Scott in the early 1930s, has been shrouded by cranes and scaffolding for years, its quartet of cream-coloured chimneys a familiar but unapproachable part of the London skyline. Now, thanks to a consortium of Malaysian property developers and architecture firm WilkinsonEyre, Scott’s building has been restored in all its monumental glory.

The result really is sublime, a vast block of rhythmic brick facades and stepped parapets, resembling something between a cathedral and a fortress. Scott was a versatile architect, adept at combining historicist and modern styles with his output ranging from Liverpool Cathedral to the red phone box (though he wanted it light blue). At Battersea Power Station, an industrial building somehow presents us with a synthesis of gothic, neoclassical and jazz-age rhetoric. For this we can thank the great British tradition of NIMBYism, since Scott was drafted in to beautify the power station after complaints from Westminster and Chelsea residents about their property values.

This Instagram-ready spectacle comes with a note of unease. For what purpose has this historic structure been so lavishly recreated? Bear in mind that, after being decommissioned in the early-1980s, it sat here for many years without a roof, in the course of failed proposals to turn it into (among other things) a rubbish incinerator, a theme park and a football stadium.

The short answer is that heritage is being honoured here, but we ought to ask what exactly this means. The redevelopment clearly has little in common with maypoles and William Morris wallpaper. It is, rather, an orgy of commodification. The former power station is now squeezed between woozy sculptural buildings designed by starchitects Frank Gehry and Norman Foster, which are packed with luxury apartments, hotels and retail. Stepping inside Scott’s restored structure, you find a banquet of historical elements — including art deco fluted pillars, steel beams and exposed brickwork — encompassing what otherwise feels a lot like a duty free shopping area, with brands like Rolex and Cartier taking the prime spots alongside Starbucks and Pret.

Elsewhere in the building, some 250 apartments, penthouses and rooftop villas are being sold for between £1 million and £18 million. Much of the 45,000 square metres of office space will be occupied by the new UK headquarters (sorry, “campus”) of tech giant Apple Inc.

The point of heritage is that people living in a particular place derive their shared identity, in part, from a connection with the history of that place. What we havehere is more like zombie heritage, where the past is kept alive in the sterile form of a branded product. It even feels misleading to say the building has been repurposed. Really it has been resurrected as a kind of Madame Tussauds waxwork, to provide a themed backdrop for property investment and shopping.

This is most obvious in the architects’ obsessive attention to “authentic” details. Bricks were sourced from the original suppliers, who made them using traditional methods of hand-moulding and wire-cutting. In the former control rooms, retro panels of dials, buttons and levers have been meticulously restored as decoration for a cocktail bar and a private events space. Someone has even contrived a puff of smoke rising from one of the chimneys. The power station has become its own death mask.

None of this should be surprising though, since Battersea is just the latest instance in a trend for turning heritage into exclusive real estate. A similar fate has ironically befallen East London’s brutalist landmark Balfron Tower, originally designed by socialist architect Erno Goldfinger. Balfron’s council tenants have now been booted out to make room for expensive “heritage flats”, adorned with 1970s period fittings and décor. Likewise, in Manhattan, the art deco profile and interiors of the latest “skinny-scraper” on 57th street, also known as Billionaires’ Row, uses as its base the restored 1920s Steinway Tower.

Back in London, the recent redevelopment of King’s Cross began with the conversion of a Victorian granary into Central Saint Martins art college, and the reinvention of 19th century brick warehouses as the retail complex Coal Drops Yard. The surrounding area now hosts the offices of various cutting-edge multinationals, including Meta and Google. The Battersea architects were involved here too, constructing luxury apartments inside the cylindrical iron frames of whatwere once gas holders.

It’s easy to imagine why the trappings of heritage might appeal to rich urbanites and corporations. Besides making wealth and power appear more humane, it is just much nicer to feel rooted in the history and fabric of a city than to look down at it, literally and figuratively, from a glass box in the sky. At the same time, because heritage is precious and scarce, it can still serve as a marker of status.  This trend has doubtless prevented some fine buildings from being destroyed, and for that much we should be grateful. Markus Binney, the conservationist who has done more than anyone else to save Battersea Power Station, is thrilled by that site’s redevelopment. He says it will now be “buzzing for years to come”, providing “a giant boost for schemes aimed at bringing Britain’s many industrial landmarks back to life”.

Buzzing or not, what we are seeing today is quite different from the old arrangement, where a historic setting would provide an attractive venue for a restaurant or business park. Heritage can maintain its civic value whilst also being a commercial asset, but increasingly, its civic value is the thing being commercialised. Developers use a whole language of place names, typefaces and design details to emphasise the presence of history, whilst only letting you access it as a consumer or a spectator of the lifestyles of the wealthy. This is privatisation in its metaphysical stage.

These developments seem especially corrosive in a case like Battersea Power Station, which has a public character due to its monumental presence in the city. To see a better outcome you only need to follow the Thames to the former Bankside Power Station, also designed by Scott, which now serves as the Tate Modern gallery. Bankside has been repurposed in a much more imaginative way, respecting the original structure without treating it as sacred. This flows naturally from the fact that the Tate has a civic function to perform. The same could be said, for instance, about St Pancras International station, or the Camden Roundhouse, or any number of London’s historic museums.

The new Battersea Power Station, by contrast, recreates an “iconic landmark” (as the estate agents have it) only to infuse it with a luxury ethos that, for all its charms, is anything but unique. The grandeur of Scott’s building, so inspiring at first sight, ultimately becomes another gimmick.