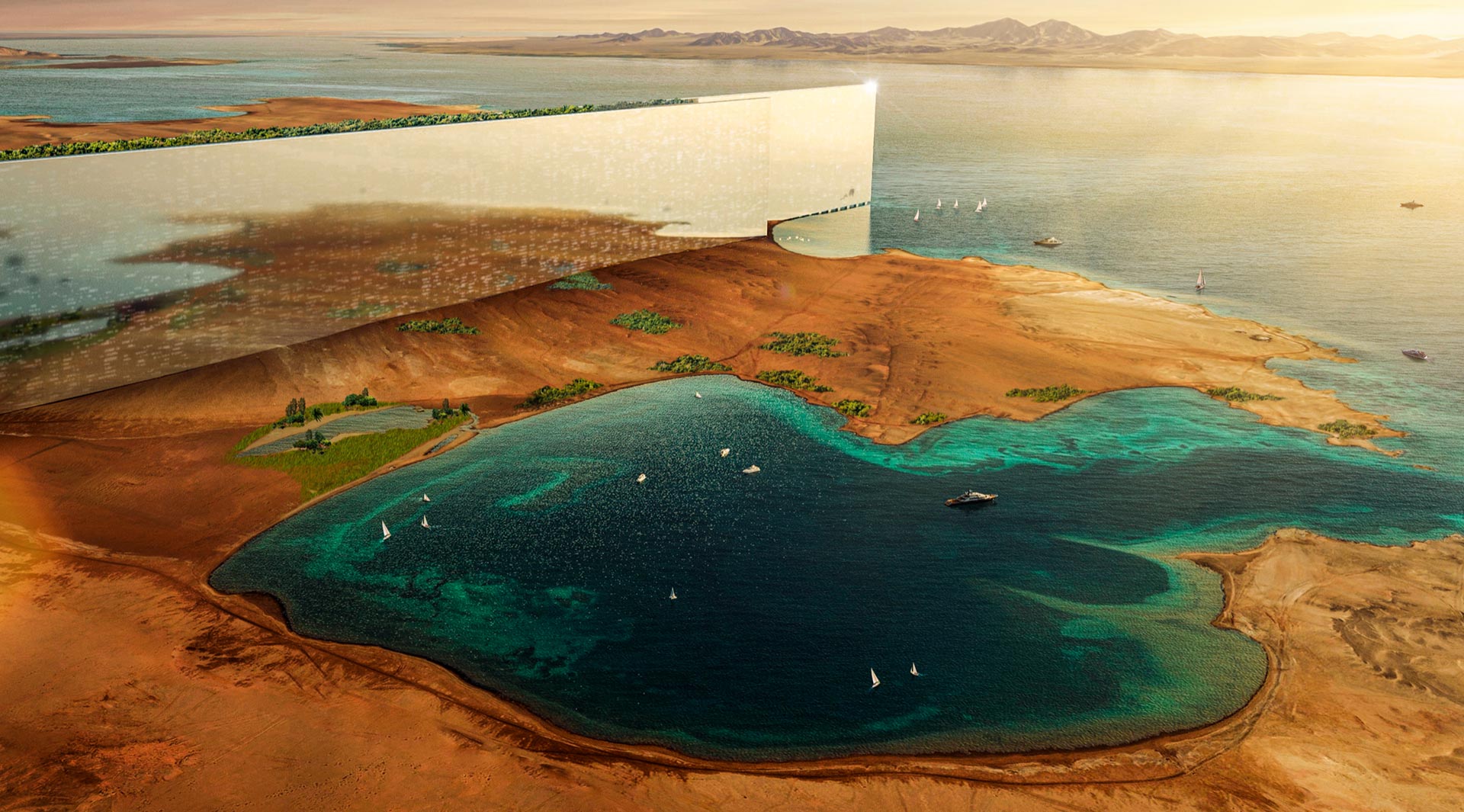 This article was originally published by Unherd in November 2022. Read it here.

For a building project marketed like a Hollywood blockbuster, the latest footage from the deserts of northwestern Saudi Arabia is a little underwhelming. A column of trucks is moving sand, a row of diggers poking at the barren landscape like toys arranged on a beach. The soundtrack, an epic swirl of fast-paced, rising strings, doesn’t really belong here.

Still, the video got its message across: it’s really happening. The widest aerial shots reveal an enormous groove in the sand, stretching to the horizon. We are seeing the birth of “The Line”, an insanely ambitious project for a city extending 170km through the desert, sandwiched in a narrow space between two immense walls. The new construction footage is an update on the viral CGI trailers that overwhelmed the internet last year, showing us glimpses of what life will be like inside this linear chasm of a city: a city where there will be no cars or roads, where every amenity is always a five-minute walk away, and where, according to one planning document, there could be robot maids.

This scheme sounds mad enough, but The Line is only the centrepiece of a much bigger development, called Neom (a blend of neo and mustaqbal, Arabic for “future”). Neom will be a semi-autonomous state, encompassing 26,000 square kilometres of desert with new resorts and tech industry centres.

There may be no philosopher kings, but there are sci-fi princes. The dreams of Mohammed bin Salman, crown prince of Saudi Arabia and chairman of the Neom board, make the techno-futurism of Silicon Valley look down to earth. Bin Salman is especially fond of the cyber-punk genre of science fiction, which involves gritty hi-tech dystopias. He has enlisted a number of prominent Hollywood visual specialists for the Neom project, including Olivier Pron of Marvel’s Guardians of the Galaxy franchise. A team of consultants was asked to develop science-fiction aesthetics for a tourist resort, resulting in “37 options, arranged alphabetically from ‘Alien Invasion’ to ‘Utopia’”. One proposal for a luxury seaside destination, which featured a glowing beach of crushed marble, was deemed insufficiently imaginative.

Such spectacular indulgence must be causing envy among the high-flying architects and creative consultants not yet invited to join the project — if there are any left. But it also makes the moral dimension difficult to ignore: how should we judge those jumping on board bin Salman’s gravy train? Saudi Arabia — in case anyone has forgotten in the years since the journalist Jamal Khashoggi was murdered at its consulate in Istanbul — is a brutal authoritarian state.

In recent weeks, this has prompted some soul-searching in the architecture community, with several stinging rebukes aimed at Neom. Writing in Dezeen, the urbanist Adam Greenfield asks firms such as Morphosis, the California-based architects designing The Line, to consider “whether the satisfaction of working on this project, and the compensation that attends the work, will ever compensate you for your participation in an ecological and moral atrocity”. Ouch. Greenfield’s intervention came a week after Rowan Moore asked in The Observer: “When will whatever gain that might arise from the creation of extraordinary buildings cease to outweigh the atrocities that go with them?”

You see, bin Salman’s blank slate in the desert was not actually blank (they never are); settlements belonging to the Huwaitat tribespeople have been ruthlessly flattened to make space for Neom. One man leading resistance to the clearances, Abdul Rahim al-Huwaiti, was killed by security forces in 2020, and three others have been sentenced to execution. Critics also point to the absurd pretence that The Line is an eco-friendly project, given the industrial operations needed to build and maintain a city for nine million people in searing desert temperatures.

There is an obvious parallel here with the criticism of celebrities and commentators taking part in the World Cup in Qatar, another unsavoury petro-state. International sporting events are notorious for giving legitimacy to dictatorships, so why wouldn’t we see architectural monuments in the same way? With Neom there is barely a distinction to draw. Zaha Hadid Architects, the British firm that designed one of the Qatari football stadiums — a project synonymous with the shocking treatment of migrant construction workers — is also working on one of the Neom sites, an artificial ski resort that will host the 2029 Asian Winter Games.

In the 21st century, Western architects have helped to burnish the image of repressive regimes, especially those big-name architects who specialise in spectacular monumental buildings. Zaha Hadid was the most wide-ranging: her trademark swooshing structures include a museum honouring the ruling family in Azerbaijan and a conference hall in Muammar Gaddafi’s Libya (never completed due to Gaddafi’s demise). But the biggest patrons of globetrotting architects have been the Arab Gulf States — especially Qatar, Saudi Arabia and the United Arab Emirates — along with China. Among countless examples in these regions, the most infamous is probably Rem Koolhaas’s Chinese Television Headquarters in Beijing, a suitably sinister-looking building for a state organisation that shapes the information diet of hundreds of millions of people each day.

The uncomfortable truth is that autocrats and architects share complimentary motivations. The former use architecture to glorify their regimes, both domestically and internationally, whereas the latter are attracted to the creative freedom that only unconstrained state power can provide. In democratic societies, there is always tension between the grand visions of architects and the numerous interest groups that have a say in the final result. Why compromise with planning restrictions and irate neighbours when there is a dictator who, as Greenfield puts it, “offers you a fat purse for sharing the contents of your beautiful mind with the world?”

This is not just speculation. As Koolhaas himself stated: “What attracts me about China is that there is still a state. There is something that can take initiative on a scale and of a nature that almost nobody that we know of today could even afford or contemplate.”

But really this relationship between architect and state is a triangle, with financial interests making up the third pole. Despite the oft-repeated line that business loves the stability offered by the rule of law, when it comes to building things, the money-men are as fond of the autocrat’s empty canvas as the architects are. When he first pitched the Neom project to investors in 2017, bin Salman told them: “Imagine if you are the governor of New York without having any public demands. How much would you be able to create for the companies and the private sector?”

This points us to the deeper significance of the Gulf States and China as centres of high-profile architecture. These were crucial regions for post-Nineties global capitalism: the good illiberal states. Celebrity architects brought to these places the same spectacular style of building that was appearing in Europe and North America; each landmark “iconic” and distinct but, in their shared scale and audacity, also placeless and generic. Such buildings essentially provided a seal of legitimacy for the economic and financial networks of globalisation. Can this regime’s values really be so different to ours, an investor might say, when they have a museum by Jean Nouvel, or an arts centre by Norman Foster? British architects build football stadiums and skyscrapers in Qatar and Saudi Arabia, while those governments own football stadiums and skyscrapers in Britain, such as The Shard and Newcastle’s St James’s Park.

This is not to suggest some sort of conspiracy: the ethical issues of working for repressive states have often been debated by architects. When the tide of liberal capitalism seemed to be coming in around the world, they could say, and believe, that their buildings were optimistic gestures, representing a hoped-for convergence around a single global modernity. It is the collapse of those illusions over the last decade that makes such reasoning look increasingly suspect.

With Neom, bin Salman is making explicit the publicity value of architecture, by pushing it to a whole new degree. Aware that breakthroughs in clean energy would essentially render his kingdom a stranded asset, he is trying to rebrand Saudi Arabia as a high-tech green state. He offers investors a package they, like many architects, dream about: breath-taking novelty and innovation, combined with sustainability and an apparent humanistic concern.

But ironically, what bin Salman has really shown is that architects are increasingly unnecessary for conveying political messages. They are being replaced by those masters of unreality who use digital technology to the same ends, like the Marvel film magicians creating a vision of Neom in the global imagination. Whether or not a city like The Line actually exists is almost beside the point in terms of its publicity value. After all, this is an era where the superhero realm of Wakanda is praised as a depiction of Africa, and where America tore itself apart for four years over a wall that never actually came into being.

Likewise, given the technological challenges involved, we can be certain the vast furrow appearing in the Saudi desert will never become The Line as portrayed in the promotional videos. But videos will be enough to project the desired image of an innovative, progressive state. That bin Salman himself might really believe in his futuristic city, encouraged by his army of paid-up designers, will only make him a better salesman.