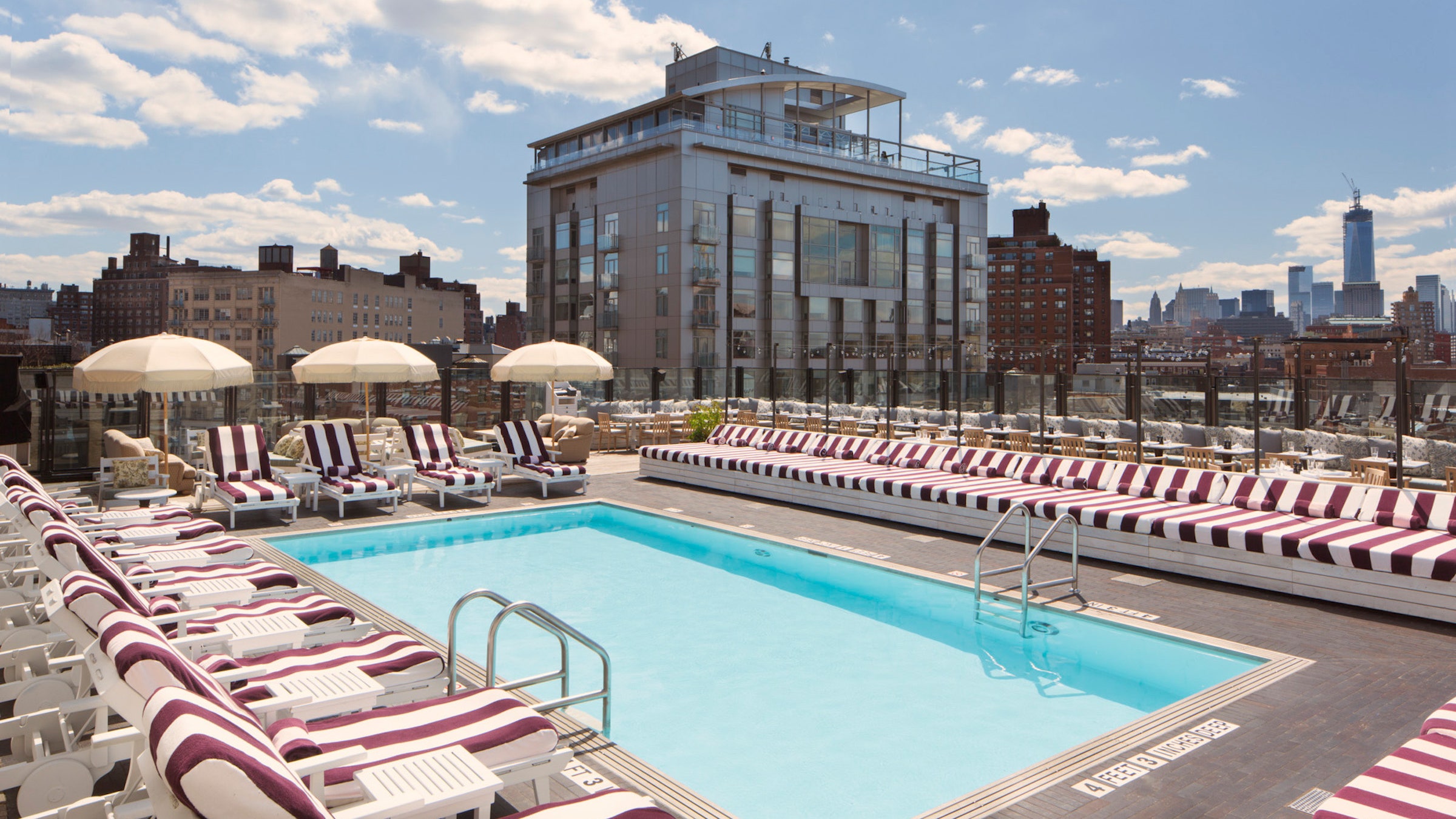 The rooftop at Soho House in Manhattan’s Meatpacking District.

There is nothing inherently creative about vintage furniture, repurposed industrial materials or menus in typewriter font, but if you found yourself in a coffee shop with all of these elements present, then “creative” would be a common way to describe the vibe. Even more so if there was a yoga studio upstairs and a barista with neck tattoos.

This visual language could also be called trendy or hipster, but the connotations are much the same. It is meant to invoke the imagined lifestyle of an urban creative – someone in or around the arts and media crowd – as it might have looked in Hackney or Williamsburg circa 2010. It signifies an attitude that is cultured but not elitist, cosmopolitan but not corporate, ethical but not boring, laid-back but still aspirational. In its upmarket versions (think more plants, more exotic words on the menu), the “creative” idiom implies a kind of refined hedonism, an artistic appreciation of beautiful and meaningful experiences.

Whether creatives can actually be found in such settings is beside the point, for once a lifestyle has been distilled into aesthetics it can be served to anyone, like an espresso martini. Indeed, the generic symbols of the creative lifestyle – suspended ceiling lights with large bulbs and metal hoods are an obvious example – have now spread everywhere, into Pizza Express restaurants and bankers’ apartments.

The strange thing is that this triumph of the creative class in the realm of cultural capital has gone hand in hand with its economic evisceration. If you did see an actual creative in our imagined coffee shop – a photographer perhaps, or dare I say a writer – he or she would most likely be working frantically on a laptop, occupied with some form of glorified gig-economy job, or struggling to get a beleaguered business off the ground, or grinding away at a commercial sideline that squeezes out actual creative work.

Everyone wants to buy into the dream of the creative lifestyle, or at least drink cocktails in a place that invokes it, but for most creatives this is as much a fantasy as it is for everyone else.

If there is one institution that can help us understand this state of affairs, it is the Soho House network of private members’ clubs. Founded by the restaurateur Nick Jones, the first Soho House opened in 1995 on London’s Greek Street. It joined a number of exclusive new venues aimed at arts and media professionals, offering, as its website tells us, a place for “like-minded creative thinkers to meet, relax, have fun and grow” – or at least those deemed worthy of membership. In 2003, a Soho House opened in New York’s Meatpacking District, one of the first steps in a dizzying expansion which has seen some forty members’ clubs appear everywhere from West Hollywood to Barcelona, Miami to Mumbai.

In terms of aesthetics, Soho House did a lot to define the “creative” style. Ilse Crawford’s interior design for the New York venue became a landmark of sorts. Ranging over six floors of a converted warehouse, whose raw industrial features were emphasised rather than played-down, it announced the hipster affinity for obsolete, forgotten or simply nostalgic spaces. A bedroom where graffiti had been left on the wall was apparently a members’ favourite. Crawford’s furnishings likewise set the trend for combining antiques, modern design classics and found objects in an eclectic approach that tried to be both modern and comfortable.

For all its apparent authenticity and bohemian flavour, this style has since been exported around the world as seamlessly as McDonalds, not least within the Soho House empire itself. The brand prides itself in giving every venue a local accent, but it has really shown the uncanny way that a design formula can make very different settings look the same.

In my reading, what all this illustrates is the emergence of a new creative elite – film producers and actors, fashion designers and models, publishers and magazine editors, musicians, advertising executives and so on – whose ambition and self-confidence were such that they did not want to merge with the existing circles of privilege. The exclusivity of these members’ clubs, buttressing the special status of “creativity,” was not about keeping the plebs out. It was about drawing a distinction with the philistines of the City of London and Wall Street, and with the stale elitism of Old Boys Clubs.

“Unlike other members’ clubs, which often focus on wealth and status,” explained the Soho House website a few years ago, “we aim to assemble communities of members that have something in common: namely, a creative soul.” When they first appeared, the brand’s distinctive aesthetics drew a contrast, above all, with the slick corporate interiors of luxury hotels in the 1990s. No suits was both the dress code and a principle for assessing membership applications, and those deemed “too corporate” have on occasion been purged. Another functionally equivalent measure was the “no-assholes rule,” though this did not stop Harvey Weinstein from winning a place on the initial New York membership.

But crucially, there is a wider context for the appearance of this creative elite. The first Soho House opened against the backdrop of rising excitement about the “creative industries,” a term adopted by Britain’s New Labour government in 1998. This idea was hopelessly baggy, grouping together advertising and architecture with antiques and software development. Nonetheless, it distilled a sense that, for the post-industrial societies of the west, the future belonged to those adept in the immaterial realms of communication, meaning and desire. In technical terms, the organising principle for this vision was to be the creation and control of intellectual property.

Economists insisted that, beyond a certain income threshold, people wanted to spend their money on artistic and cultural products. A supporting framework of information technology, university expansion, globalisation and consumer-driven economic growth was coming into view. And a glimpse of this exciting future had already appeared in the Cool Britannia of the 1990s, with its iconoclastic Young British Artists, its anthemic pop bands, its cult films and edgy fashion designers.

Institutions like Soho House provided a new language of social status to express these dreams of a flourishing creative class, a language that was glamorous, decadent, classy and fun. The song Ilse Crawford used when pitching her interior design ideas – Jane Birkin and Serge Gainsbourg’s 69 Année Érotique – captures it nicely, as does a British designer’s attempt to explain the club to the New York Times: “Think of the Racquet Club but with supermodels walking through the lobby.” The appeal of this world still echoes in the fantasy of the creative lifestyle, and surely played a part in persuading so many in my own generation, the younger millennials, to enter creative vocations.

So what happened? Put simply, the Great Financial Crisis of 2007-8 happened, and then the Great Recession, rudely interrupting the dreams of limitless growth to which the hopes of the creative industries were tied. In the new economy that formed from the wreckage, there was still room for a small elite who could afford Soho House’s membership fees, but legions of new graduates with creative aspirations faced a very different prospect.

Theirs was a reality of unpaid internships and mounting student debts, more precarious and demanding working lives, a lot of freelancing, poor income prospects, and reliance on family or second jobs to subsidise creative careers. Of course some of the pressures on young people in the arts and media, like high living costs and cuts in public funding, vary from place to place: there is a reason so many moved from the US and UK to Berlin. By and large though, the post-crash world starved and scattered the creative professions, squeezing budgets and forcing artists into the grim “independence” of self-promotion on digital platforms.

One result of this was a general revulsion at capitalism, which partly explains why artisan ideals and environmentalism became so popular in creative circles. But despite this skepticism, and even as career prospects withered, the creative lifestyle maintained its appeal. In fact, the 2010s saw it taking off like never before.

Young people couldn’t afford houses, but they had ready access to travel through EasyJet and AirBnB, to content through Spotify and Netflix, to a hectic nightlife through cheap Ubers, and they could curate all of these experiences for the world via Instagram. They could, in other words, enjoy a bargain version of the cultured hedonism that Soho House offered its members. The stage-sets for this lifestyle consumerism were the increasingly generic “creative” spaces, with their exposed brick walls and Chesterfield armchairs, that multiplied in fashionable urban districts around the world.

Perhaps the best illustration of this perverse situation is the development of the Soho House empire. Alongside its exclusive members’ clubs, the company now owns a plethora of trendy restaurant chains for the mass market. You can also get a taste of the Soho House lifestyle through its branded cosmetics, its interior design products, or a trip to one of its spas. With new membership models, freelancers can take their place among the massed vintage chairs and lamps of the brand’s boutique workspaces. There was even talk of going into student accommodation.

And so an institution that symbolised the promise of a flourishing creative class now increasingly markets the superficial trappings of success. As a kind of compensation for the vocational opportunities that never materialised, creatives can consume their dreams in the form of lifestyle, though even this does not make them special. The 2010s were also the decade when the corporate barbarians broke into the hipster citadels, occupying the clothes, bars and apartments which the creative class made desirable, and pricing them out in the process.

In one sense, though, the “creative industries” vision was correct. Intellectual property really is the basis for growth and high incomes in today’s economy; see, for instance, the longstanding ambition of the Chinese state to transition “from made in China to designed in China.” But the valuable intellectual property is increasingly concentrated in the tech sector. It is largely because IT and software are included that people can still claim the creative industries are an exciting area of job creation.

The tech world is, of course, a very creative place, but it represents a different paradigm of creativity to the arts and media vocations we inherited from the late-20th century. We are living in a time when this new creativity is rapidly eclipsing the old, as reflected by the drop in arts and humanities students, especially in the US and UK, at the expense of STEM subjects. Whether tech culture will also inherit the glamour of the declining creative milieu I can’t say, but those of us bred into the old practices can only hope our new masters will find some use for us.