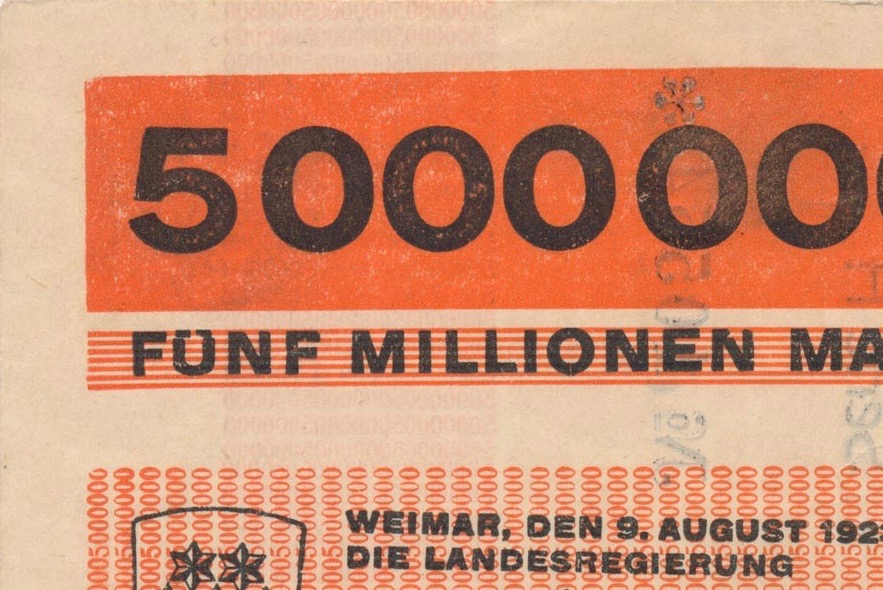 Detail from Herbert Bayer’s five-million Mark banknote, designed for the State Bank of Thuringia in 1923.

One of my favourite artefacts is a series of banknotes designed by Herbert Bayer in 1923, during Weimar Germany’s famous hyperinflation. This was the period when, as you might recall from the images in your school history textbook, the German currency devalued so dramatically that people needed wheelbarrows of money to buy a loaf of bread, and cash was a cheaper way to start a fire than kindling.

Bayer’s banknotes, which came in denominations from one-million to fifty-million Marks, are emblematic of how crises can stimulate innovative design. If it wasn’t for the unusual problem of needing to produce an emergency supply of banknotes, it is unlikely the State Bank of Thuringia would have commissioned Bayer, who was then still a student at Bauhaus school of design. Bayer had no formal training in typography, but he did have some radical ideas involving highly simplified sans-serif numbers and letters, which he duly used for the banknotes. The descendants of those numbers and letters include the font you are reading right now.

This story resonates with an outlook we might call the heroic theory of design, where designers step up at moments of crisis to change the world. Typefaces don’t seem like a big deal, but Bayer’s ideas were part of wider movement to radically rethink every area of design for the practical benefit of society as a whole. By 1926, he had developed a “universal alphaphet” of lower-case-only, sans-serif letters, to make printing, typing and public communication more efficient and accessible. The Bauhaus (or bauhaus, as Bayer would have put it) was suffused with such urgent, experimental thinking, always framed as a response to the prevailing mood of crisis in Weimar Germany. This is part of the reason it remains the most influential design school in history, despite only operating for fourteen years.

The heroic theory is deeply appealing because it taps into the basic narrative of modern design: the promise of order in a world of constant change. The words “crisis” and “emergency” describe modernity at its most raw and contingent, a “moment of decision” (the original Greek translation of crisis) when the shape of the future is at stake in a fundamental way. Crises therefore seem to be the moments we are most in need of design and its order-giving potential, to solve problems and resolve uncertainty in an active, positive manner.

But to what extent can design actually play this heroic role in times of crisis, and under what conditions? This question is of more than academic interest, since we ourselves live in an era defined by multiple crises, from climate and pandemic to war, energy shortages, economic hardship and political turbulence. The German chancellor Olaf Scholz has even invoked the concept of Zeitenwende, “a time of transformation,” which was current during the Weimar years.

The eminent writer Alice Rawsthorn has responded with a new heroic theory of design, first labelled “design as an attitude” (the name of her 2018 book) and more recently “design emergency.” Rejecting the traditional image of design as a commercial discipline, Rawsthorn places her hope in resourceful individuals who find innovative answers to ecological, humanitarian and political problems. More broadly, she encourages us, collectively, to see crisis as an opportunity to actively remake the world for the better. There is even a link to Weimar, as Rawsthorn draws inspiration from another Bauhaus figure, the Hungarian polymath László Moholy-Nagy, who was Bayer’s teacher at the time he designed his banknotes.

The new breed of heroic designers includes the Dutch university student Boyan Slat, who crowd-funded an enormous initiative to tackle ocean pollution, and the duo of Saeed Khurram and Iffat Zafar, doctors who used video conferencing to deliver health care to women in remote Pakistan. Rawsthorn argues that, while many of our systems and institutions have shown themselves no longer fit for purpose, network technology is allowing such enterprising figures to find funding, collaborators and publicity for their ideas.

That point about the empowering potential of networks strikes me as crucial to the plausibility of this outlook. The Internet has definitely made it easier for individual initiatives to have an impact, but can this effect really scale enough to answer the crises we face? Going forward, the heroic theory hinges on this question, because history (including recent history) points in a different direction.

We need to draw a distinction between the general flourishing of creativity and ingenuity in times of crisis, and the most consequential design visions that are widely implemented. The latter, it seems, are overwhelmingly determined by established institutions. Take Bayer again; he could not have put his designs in hands of millions of people without the assistance of a state bank, any more than he could have actually solved the problem of hyperinflation. Likewise, the immediate impact of the Bauhaus and of Modernism in general, limited as it was, depended on its ability to persuade big manufacturers and municipal governments to adopt its ideas. Margarete Schütte-Lihotzky’s groundbreaking Frankfurt kitchen, which I wrote about recently, owed its success to the boldness of that city’s housing program.

Innovation in general tends to unfold in stages, and often with input from numerous sources, big and small. But in times of crisis, which typically demand large-scale, complex initiatives on a limited timescale, institutions with significant resources and organisational capacity play a decisive role. Insofar as individuals and smaller movements make a difference, they first need the levers of power to be put in their hands, as it were.

Wars are famously powerful engines of innovation, precisely because these are the moments when the state’s resources are most intensely focused. Addressing the problems of infectious disease and abject living conditions in the 19th century required not just city planners and sanitation experts, but governments to empower their designs. No one expects plucky outsiders to develop vaccines or mitigate the effects of financial crises. Even on the longer time horizon of climate change, the development of renewable energy is requiring extensive government and corporate involvement, partly to combat the vested interests of the status quo. The crucial breakthrough may turn out to be the emergence of a “green industrial complex,” a new set of powerful interests with a stake in the energy transition.

This does not mean the answers arrived at in this way are necessarily good ones, and they will certainly bear the stamp of the power structures that produce them. This is why slum clearances in the mid-19th century produced cities designed for property investors, while slum clearances in the mid-20th century produced public housing. That said, it is not straightforward to work out what a good answer to a crisis actually is.

Though crises usually have an underlying material reality, they are ultimately political phenomena: a crisis comes into existence with our perception of it (the “fear itself” that Franklin Roosevelt spoke of during the Great Depression). Thus an “effective” solution is one that addresses perceptions, even if its material results are questionable. Rawsthorn understands this, as did the Modernists of the 1920s, for these approaches to design are about transforming worldview as much as generating practical solutions. But ultimately, the political nature of crisis only reaffirms the importance of powerful institutions. For better or worse, there tends to be Hobbesian flight to authority in times of emergency, a search for leaders who can take control of the situation.

Another observation which undermines the heroic theory is that the most important designs in moments of crisis are rarely new ones. As Charles Leadbeater points out in his fascinating comparison of British efforts during the Second World War and in the Covid pandemic (and hat-tip Saloni Dattani for sharing), effective answers tend to come from the repurposing of existing technologies and ideas. This too has a strong institutional component, since knowledge needs to be built up over time before it can be repurposed during a crisis.

By way of illustration, Leadbeater’s remarks about the UK’s failed efforts to design new ventilators in the midst of the pandemic are worth quoting at length:

Code-named Operation Last Gasp when the Prime Minister first enlisted British manufacturers to pivot their production lines from aero engines, vacuum cleaners and racing cars to ventilators, five thousand companies and 7,500 staff responded to the challenge to design new ventilators, in what was billed as a showcase of British engineering prowess. Companies such as Dyson and Babcock joined universities and Formula 1 teams only to find they were sent down blind alleys to design, from scratch, machines that clinicians would not use.

Those in the industry who suggested that it would be more sensible to produce more machines based on existing designs were eventually vindicated… The main usable innovation was a version of an existing British machine which was upgraded so it could be exported.

The 2,500 ventilators the UK procured from abroad were more sophisticated machines needed to sustain people in intensive care for weeks on end. The most famous manufacturer of those high-end machines is the family-owned German company Draeger, founded in Lubeck in 1889, which made the first-ever ventilator, the Pulmotor. The company’s latest product, the Pulmovista 500 visualises the flow of air through the lungs in such detail that clinicians can monitor it in real-time and make minute adjustments to the flow. The company’s chief executive, Stefan Draeger is the fifth generation of the family to lead the company. You do not invent that kind of capability from scratch in a few weeks.

Even 1920s Modernism, the archetypal heroic design movement, did not emerge ex-nihilo. Its foundations were laid in the years before the First World War, through the patronage of German industrial giants like AEG, and in the Deutscher Werkbund before that.

For Rawsthorn’s vision of crisis entrepreneurs to be realised on a bigger scale, network technology would have to replace this institutional development across timewith individual collaboration across space. For all the power of open source databases and information sharing, I’m yet to be convinced this is possible.

It remains true, of course, that crisis design which fails to have an immediate impact can still be revolutionary in the longer term. The Bauhaus is an excellent example of this. But it’s interesting to note that the lasting effects of crises on design are not always predictable. The experience of popular mobilisation for the First World War persuaded the survivors of the power of mass media and propaganda. The idea of “built-in obsolescence” – making minor alterations to products so that consumers want to buy the newer version – was widely taken up in response to the Great Depression. Research undertaken during the Second World War led to a boom in the use of plastic materials. Covid, it seems, has prompted the mass adoption of remote working technologies.

Crises pave the way for such shifts, because by definition, these are moments when we see our current reality as provisional. At times of crisis, like the one we are in now, no one believes that the future will look like the recent past; we have, unconsciously, prepared ourselves for dramatic change. In this space of expectation new forms of design can emerge, though we don’t yet know what they will be.